The basement that shall not be named 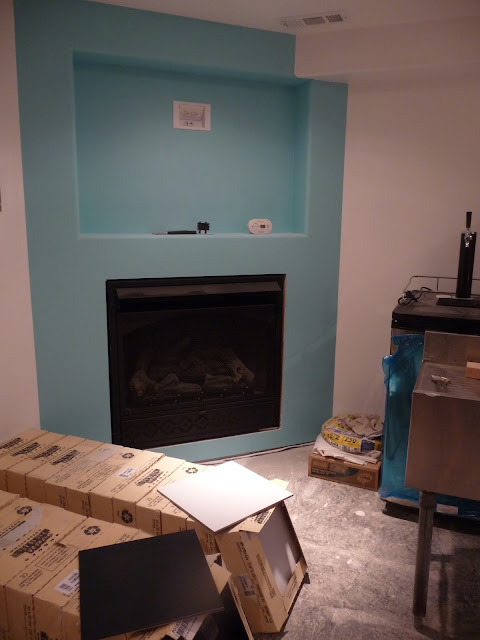 Why yes, that is a kegerator (and yes, i had to look up how to spell that), and the TV will be recessed into that space above the gas fireplace. 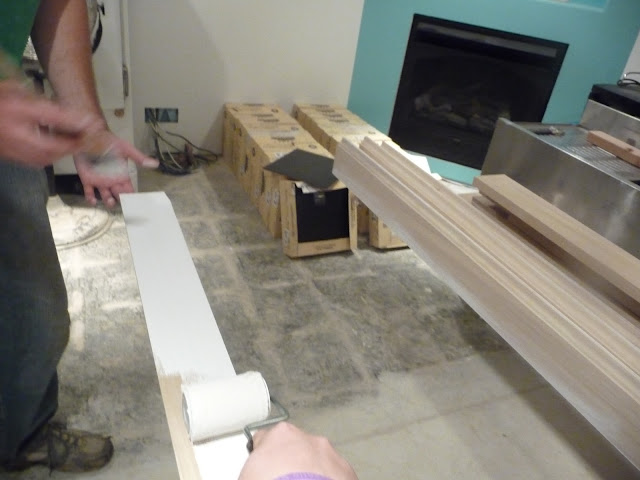 Tag teaming the baseboard, all made by S's brother in his shop.  The picture's a little blurry-i'm rolling with my right hand, and trying to take the picture with my left (the wrong hand) and S didn't get the memo to stop moving for a moment! 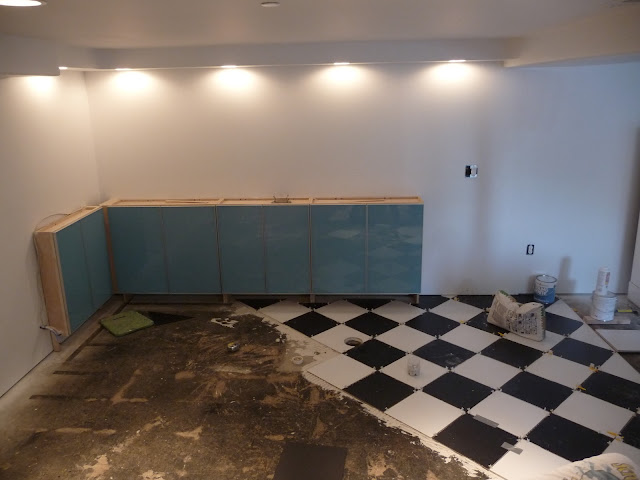 We're calling the look retro modern drive in inspired, and we are LOVING the reflection of the tiles in the cabinet doors.  However, the bar will be going in front of the doors  (see the hole for the sink hookup?) so we have to figure out a way to make the bar front reflective.  We're thinking painting it the same bold color as the fireplace, but then plexiglass or glass on top to reflect the tiles.  Those doors are Ikea--they were a "last chance" deal so when we finally installed them and saw their kick assery, it was too late to order more to build into the bar.  The cabinets were made by S and his brother in law, and will be topped with black granite like the bar top will be. 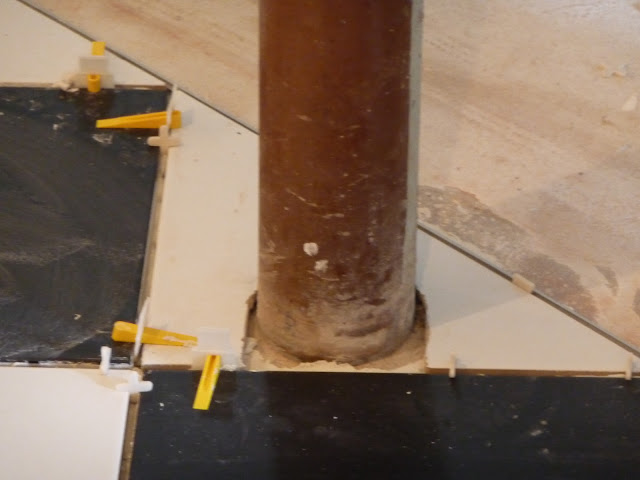 Just wanted to show you the skills that had to go into laying this tile, and the extra measures that we took to make them level. Those little yellow things are used to hold the tiles down where it's needed, b/c the flooring in the basement is super wonky.  After some black grout, it will look amazing!

Now i know "retro modern drive in inspired" is not everyone's look, and in fact, most people rip up this black and white flooring in favor of something else, but what can i say?  We can still appreciate the look of something even if it isn't exactly what we'd want for ourselves, right?    I don't like shabby chic/french inspired/country/tuscan for myself, but i appreciate the time someone spends perfecting their home to reflect their style.

And i promise (like i've been promising) to go waaaay back with the basement and where it started, but now that it's coming together, i'm just too excited to hold back.

What's exciting you guys these days? Email ThisBlogThis!Share to TwitterShare to FacebookShare to Pinterest
Labels: basement, before and after, diy, fireplace, paint, reno, woot

That is looking awesome! I love black and white tiles. I would love a bathroom done in that style. I can't wait till you get it all done! You have worked so hard on it! hugs, Linda

I like it! Looks like a lot of hard work, I bet you're going to love it when you're done!

Well, I think this looks kick-a** myself! You are doing a great job on this and my husband would lust after that kegerator (sp). Looking forward to seeing the finished area. Ann

I love the tile! We were initially thinking Coca-Cola/diner for our basement bar area, ended up changing plans a little. It's so much work! Good luck!

I personally love the look of a black and white checked floor.
This is going to be a great space!
Rhonda

That's awesome that you're getting closer to being done...what a big project but it definitely looks like all the hard work will pay off in the end!

Always a good thing to be close to the end of a project - anxious to see the finally finished product.
Cindy

I love the black and white tiles. Totally classic! I know you are excited to get this done! Life to the full, Melissa @ DaisyMaeBelle

Wow that is so cool. I totally appreciate the modern drive-in look. I also think blue is way better than red in this scheme. You are so lucky to have a dry basement. I have not published one picture of it. hehe.

I'm not a fan of the whole french/country (as interpreted by Americans)either. I'm not sure what my style is.

Wow! Is that ever going to be nice.
I think the retro look is going to really neat, so many ways to decorate and have fun with it!

It's looking great! I love the retro touches combined with the modern. Be sure to show it to us when it's complete!

Well, hello there! MIssed you in blogland!

You did not get a kegerator! LOL! That's awesome. Looking great so far and can't wait to see more progress!

I love your retro look - can't wait to see it finished.

The black and white checkered tiles is perfect for kitchen.

ohhhhh. can't wait to see how your space will turn out with your black/white floors. Love it!

Jaw dropping fantastic! I love the color, the tiles and well everything.
Mr. Decor like the kegarator. Sp? :)

Love those black and white tiles. Looks like it's going to be a fantastic space!

I agree with what you say about it not being everyone's jam, but how we can all appreciate each other's hard work. I think it looks awesome. I cannot wait to see some great befores and afters!

Hey thanks for popping by my blog! I dig yours! Your house is awesome and honestly those tiles ROCK! The cabinets are smooth too! Best of luck in finishing your space! Cheers!

Oh I can totally relate to a basement project that feels like it has gone on forever. We are right there! Looks like you all are making awesome progres though.

Hi bloggy bff! :) This is going to look amazing!!! I love paint color around the fireplace. That recessed space above it for your TV is pretty cool too! And I love the checkerboard flooring. I can't wait to see it when it's done! So awesome!!

How awesome!! Looks like a ton of work, but it'll be sooo nice when it's done! Wanna come do mine next? ;)

It's going to look amazing! Thank you for sharing this at my Make it Pretty Monday party at The Dedicated House. Hope to see your prettiness again on Monday. Toodles, Kathryn @TheDedicatedHouse

HEHEHE "super close to being done" man, have i heard that before!!! my hubby tore the kitchen apart and then stopped for 3 years... so i had to cook everyday in a kitchen with no backsplash and no countertop lol

I love this retro diner style and look forward to seeing it all done up! It will be so fun for you guys to hang out here.