Things started off strong this past year, in terms of home improvement tweakings.  A Christmas gift from the boyfriend prompted our master bedroom to receive the paint it had been waiting 3 months for.  You see, in October 2010 for my birthday, all i wanted was the bedroom to be painted.  I even bought the paint.  You read that right...for my birthday...I bought the paint. My gift was going to be not actually doing the painting myself, and we'd finally quit treating the whole upstairs as an afterthought. 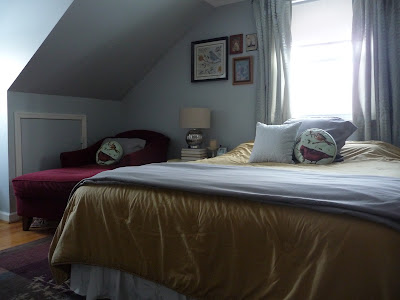 Turned out to be one of my most popular posts.  Warning, if you click through, you will be singing Boy George the rest of the day.

Then i got the strong urge, and better decorating ideas since i'd been doing this whole blog thang, to de-brownify the living room.  Let's enhance the light blue, and finally, embrace the chevron craze.  I also saw napkins in a whole new way. 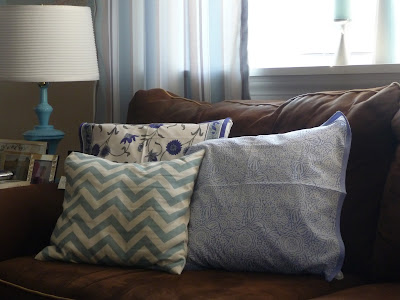 I felt it was time to grow the blog, as we were now celebrating our one year blogiversary.  Shout out to my bloggy friend Jill for twisting my arm.  The summer would bring additional guest posts and a facebook page (which i still find pointless).

But the biggest blow in 2011, and that which defined my entire year, was my father's diagnosis of the bastard known as pancreatic cancer.  I could barely post, and when i did, it was random crap.  I just couldn't spend energy composing some witty or amusing commentary when i was in hell.  Nor was I in the mood to do anything terribly creative.  There are literally less than half the posts than in the previous year, and this was after proclaiming i was going to "grow the blog."

We pretended everything was going to work out, and went to Spain for a much needed 2 week reprieve from thinking.  It worked, but made it all the more depressing to come home and know what we were having to face.

I posted this in August when things were getting bad and i didn't want to think, but didn't want to not blog either.  We had actually gone on the trip back in April, so for time line purposes it falls here.

Taking to the outside of our home, we got rid of the mudpit!  I think S did a fabulous job here, considering we spent so much of the summer at my dad's house. 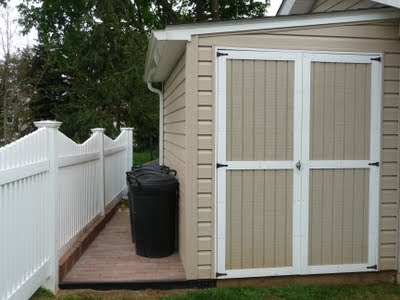 On August 25th, 2011, barely over 4 months ago, my father passed away.  Devastated.  Still devastated. 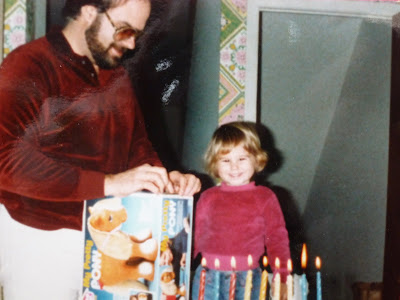 That's me as a happy little girl celebrating Chanukah.  Much different than how i viewed this holiday season, the first holidays and birthdays without him all occurring in these recent months.

Because of that, i hardly decorated for my favorite time of year, Halloween and Autumn. 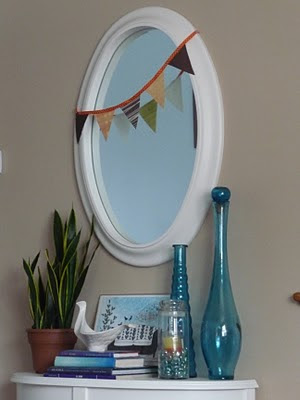 Just a used car lot for Autumn and winter whites and snowflakes now. 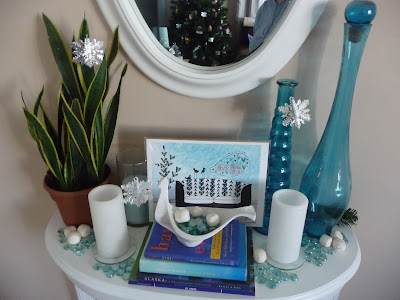 That brings us to the end of the year, and the beginning of a new one in only a few days.  As much as i want this year to be over and done with (as my family also lost my step pop-pop), it is truly unimaginable that now, year after year after year, will be years spent without my father. And for that, honestly, i don't want this December to come to an end.

But.  There's nothing i can do about that.  I just hope that 2012 brings us, and you, my friends and readers, a drastically different and positive year.  Thanks for sticking with me.

This post has nothing to do with decorating. For Winter.  Or for holidays.

This post has nothing to do with the house.  No basement updates.  No thrifty finds.

This post has to do with fashion.  A first for this blog? A fashion faux pas.

Scrolling through reader, I came across a post from La Dolce Vita.  Noticed something a little familiar about the fashion choice of the Olsen on the right... 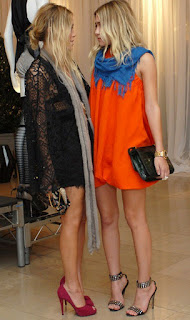 Does it remind you of anything?

"Barney, my pebbles.  Tis the season to be sharing, Fred".  Remember that xmas commercial?

There you go, maybe this post has to do with the holidays after all.

Have you ever unintentionally dressed like a cartoon character?

Intentionally, then?
Posted by the cape on the corner at 9:10 AM 25 comments:

I'm being seasonally lazy this year! Just like for fall, when i didn't change the decorations for halloween, i'm now in winter decor mode, and have yet to add in any xmas or chanukah. And i'm not sure that i even will.  Aside from the tree, this set up could take me straight through the whole season. Hehe, if you look in the mirror you see a sans decorated tree in the above photo, and then with ornaments in the photo below.  I added some extra snowflake ornaments to even further winterfy this table/quasi mantel.  Those white "snowballs" are part of my summer woven ball filler, but i thought they could work for winter grouped in this way.

This is the maiden voyage for this tree, and she ain't so bad.  Much narrower than our other tree, yet much better for the space.  And she went up in literally one, two, three....as opposed to our usual assembly line of "find correct branch color.  separate into piles.  fluff each branch.  add to tree.  repeat.  repeat.  repeat" over an hour or so.  Not to mention then string the lights. 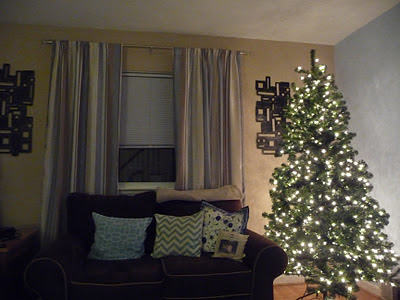 I was suckered into spending 10 bucks on this sparkly winter beauty.  And by suckered, i mean i saw it, and i needed it. Darn you, big lots and your aisles of seasonal goodness! 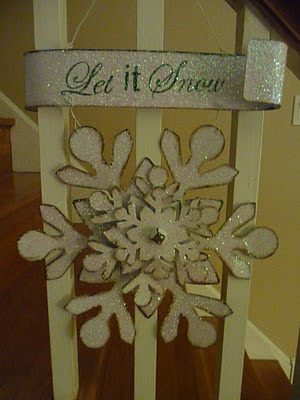 Continuing with the white, we adorn the outside.  And by we, i mean the boyfriend.  No way I'm going onto the roof for those dormers! 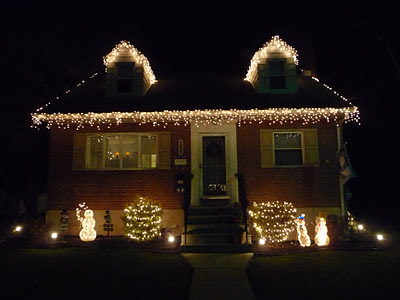 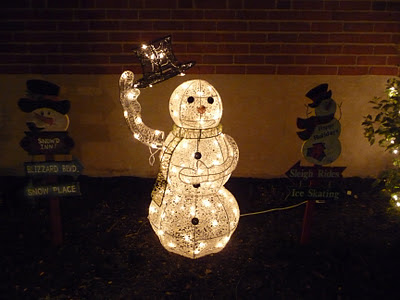 His big lot friends (who miraculously have lasted through 4 years and were 8 bucks for the pair).  That left guy looks like he's up to no good with that smirk. 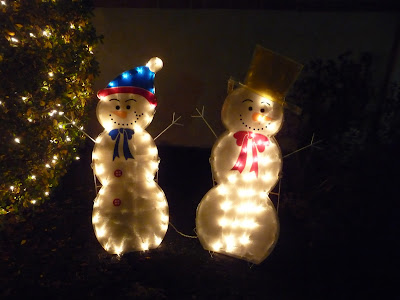 Because we're on the corner (hence the name of this blog) S thinks it means the lights need to span the entire perimeter... 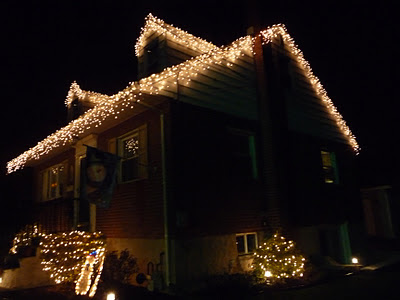 And circle the entire house.  He threatens to add lights to the bump out (which you can kind of see above the sunroom) and to around the detached garage.  I fear it would be bordering on Griswald-esque if that takes place. 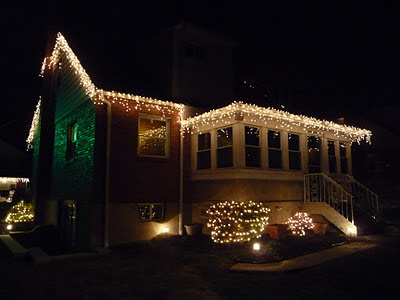 I promise there's nothing green being projected on the house-that's got to be coming from the street light.  In case you were wondering if that green glow was purposeful.  Surely not on my neutrally decorated half Jewish house.  Surely not.

Don't you love seeing other people's lights up?  It's the internet equivalent of driving around aimlessly-think of the gas we're saving!

out, out, damn (empty) pots

Nothing like starting the morning off with a literary reference to keep you on your toes, eh?


So this is the ol' homestead all suited up for the season.  We like the snowmen.  We don't like the empty pots adorning the stairs. 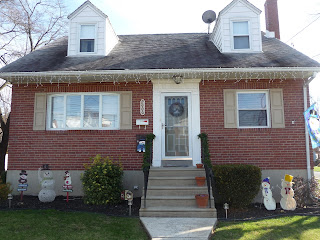 Frosty says top o the morning to you. 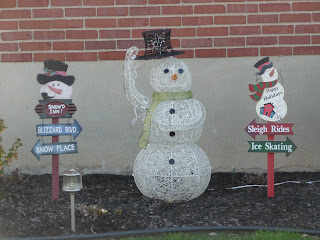 This picture was inspiration for the empty pots.  S's dad graciously scoured New Jersey for large pinecones and brought me back a grocery bag full.  None were the mammoth size that this person has, wonder where they live.

Glee!  Not too bad, right?  I knew there was a reason i left these things on the stairs! 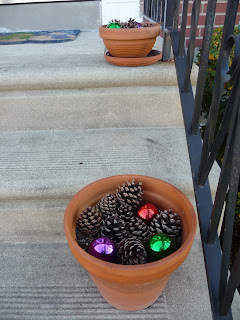 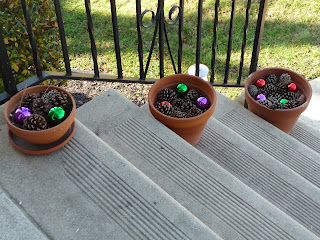 These are at the end of our walkway, by the sidewalk.  Perhaps as you're walking by with your dog, 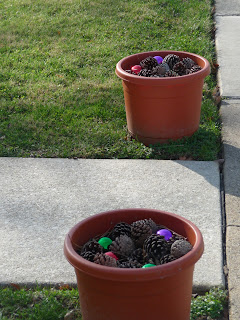 you notice a bit of bling, a bit of holiday cheer.  Puts a little more spring in my step when i see something i like and maybe haven't seen before. 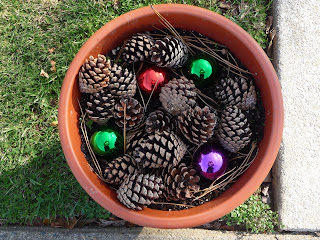 Sure, my pinterest inspiration was full of lush greens and undoubtedly taken with fancy camera-so what! Super happy with my now not empty and holiday-fied pots.

Whadya think?
What do you do with your pots when it's too cold for plants?


You can find me here, and also in my sidebar: