Girl, put your records on

We discovered this local auction house that runs every Friday night. It's...well, it's a sight, that's for sure.  I swear there was a hair metal 80's rock legend in the house when i went.  As well as families eating ice cream, shop owners buying for their store, and other creatures coming out of the woodwork. A great place to people watch and item watch.

S sends me the listings every Friday b/c he really wants to go, even just to watch.  That's what we were supposed to be doing....rotating our chairs as they move around this giant room and watching, when he randomly bid on and won this circa 1917 Victrola.  (Rachel was spot on with that guess!) 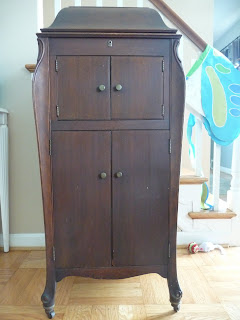 No, there was no talk about it with me, his hand just shot right up, and bam. Victrola. Did we look at it closely before bidding? Negativo. Did we know there were gauges or scratches on it? That would be another no. But...it's still pretty cute. And not bad for 30 bones. 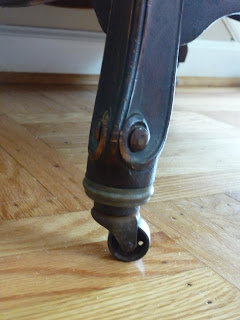 Bloggers are giving casters major love right now, and i loooove the shape of the piece.   How great would this be repurposed as a jewelry armoire or other bedroom storage.  Apparently this was S's idea if it didn't work...love that. 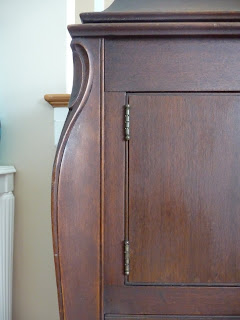 So, it slightly works.  The needle is dragging on the record, which is weighing it down so it doesn't spin.  Secretly i'm happy about this fact, because i want this to live in the bedroom.  Right now it's living in the dining room, as yet another thing the boyfriend needs/wants to work on.  You know, since it's not like we're finishing the basement or anything.... 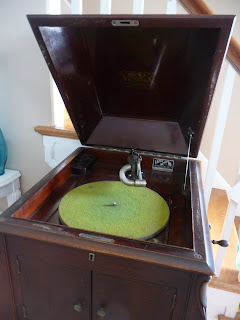 There is quite the musty smell coming out of them there drawers, but it doesn't seem to be fazing the ol' inspector. 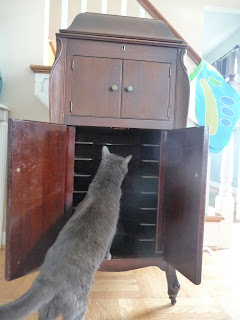 She's rather smitten.  She's a smitten kitten...(yeah, working in a spur of the moment Friends reference!) 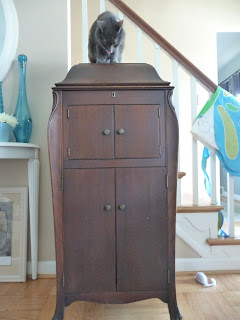 She crawls thru the railings just to sit atop this thing.  Unreal. 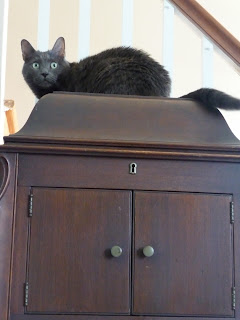 There were a few things i wanted to bid on, but they went for much higher prices than i'm willing to pay.  Why couldn't everything be as reasonable as Vic here?  I was scared to rub an eye, fix my hair, even yawn lest they think i'm bidding!

Ever been to an auction? Do any impromptu bidding?  Just go to watch?

how fun is that!!! your cat does a superb job modeling your new find :) love it!

What a gorgeous piece!! Enjoy it :)

Wow I think you guys got a great deal for $30!! It's got amazing lines and oh yes I can see it repurposed as well. I've only been to one auction years ago. It moves so fast for me that I'm a little scared! Sounds like fun though!

Fun! I would have never guessed that it was a record player! Very cool piece!

Carol, The Answer Is Chocolate said...

You are so cute with the title of your post! I love Corrine I love the idea you have to use it as an armoire would you paint it?

It's a beautiful piece! I could see it repurposed as a liquor/bar cabinet, of course not everyone drinks.
Would also be nice for storing old photographs, photograph books, special documents, sentimental things, etc.

OMGosh! How lucky are you. That Vic is gorgeous. Looks like it is in great shape. It is beautiful. I have never been to a "real" auction. I am afraid I would be the one that bids on things I shouldn't because I would be making gestures that aren't really a bid gesture! Hope you are having a great week so far. Hugs, Karie

Sabotage the record playing part. This thing is meant for bigger and better things. It is gorgeous!

I love auctions!!! I have bought some great items at them and look forward to every one I can go to. And as soon as I saw that I thought of a jewelry armoire! I like the color it has but painted a fun, bright, funky color could work too... or just the inside!

$30 is cool bid for this piece of beauty. It'll be perfect if the record player works, I love the sound of vinyl records. Thanks for dropping by my blog btw.

Love this piece! It will be great storage, too.

busy week just getting back to your blog and love the post - you crack me up with your "negativo" comment. what's gotta be has gotta be and apparently this victrola was meant to come home with you. it's lovely. and fun!

ok now thats cool!
love the title of the post too.. one of my fave songs lol
Tana

It's beautiful! I would really love to have a record player... I have some records and my father has hundreds of them, all the classics from the 60's and 70's. So jealous!

Ann from On Sutton Place said...

Love the curves on this beauty...I've never been to an auction but would love to go sometime. Thanks for sharing, for visiting my blog and for taking the time to comment. Happy 4th of July!

Katie @ On the Banks of Squaw Creek said...

I was just about to say, "How fun!" but I see the first Katie commenter already said that. :) It is a neat piece!

I don't know what I love more--the record player or the cute kitty! That's a fantastic find. Thanks for sharing!

What a cool piece! Fix it up and ROCK ON! ;-) Or re-purpose it as a jewelry armoire. I'm flexible!

I've only been to livestock auctions, but yeah, you don't want to move at the wrong time!

That thing is GORGEOUS! It could be the most awesome jewelry armoire! Very cool!

Love the shots of your smittnen kitten. How cute. I went to an auction once and got my dresser, which I love. They are a bit overwhelming.

It is a really pretty and shapely piece! I think you got a good deal on it. I've been to some auctions before. They make me very anxious and yes, yes you do have to be careful about moving around!

I am cracking up! My nose or face or head itches every time I go to an auction!!! What's that about???

I love the Victrola and I think it would be great in the bedroom.

Thanks for coming to THT.
Rhonda

Great piece! I have seen these repurposed as a liquor cabinet or jewelry armoire. Thanks for linking to the Open House party this week.
xo,
Sherry

So jealous of your fab find! Glad I found your blog through the Amanda's linky party, I will be back to visit often! xoxo michele

That is SUPER cute!!!! Who cares if it works...its adorable and will look cool just sitting there looking pretty! Thanks for your sweet comment on my dresser redo. Nice to meet ya! :)

WOW! That is AWESOME! I've never been to an auction, intimidated I guess. But WOW! Maybe I will! lol

$30? Deal! I love scores like that. The lines are beautiful. Are you going to repurpose it for sure then? It looks great as-is!

Such a fantastic piece! Your cat is adorable!

Nice find! I am scared to go to an auction! hahaha
gail

What a cool piece! Def a good buy for 30 bucks!

Again- major score.
I have seen them repurposed as portable bars. For me that would be a lemonade stand.

Ah- takes me back to my youth...no, not the 1917 version, but my much older aunts had this type of player back when extended family gatherings were commonplace.

Beautiful piece! Have you figured any good ideas for removing the musty smell?

Oh my goodness, I used to have one of those beautiful old pieces many years ago...foolishly didn't take it with me when I moved.

What an amazing find! At a great price no less. I bet it was fun to go to this auction. It sounds like a fun way to spend some time. thank you for joining TTF and have a wonderful weekend!