A while back S had scary medical issues and we didn't know what it was.  After many tests and doctors and ER trips, we learned it is a variation of migraines.  They were manifesting themselves in an unusual way, making his whole left side go numb, along with his tongue.  Sometimes he walked hunched over and at the pace of a 90 year old man.  Nothing would make him feel better except laying on the floor on his back.  We couldn't make plans or do anything since it would happen all of the sudden.   He got glasses, thinking it was something with his eyes.  He went to the dentist thinking it was something to do with his mouth.  He got Magical Pillow, which is what we call the memory foam pillow.  Along with the right meds, it helped him feel better.  It was magical.

Additionally, our bed sucks.  It was my mom's, and it is almost as old as i am, yet still hard as a board.  We. hate. it.  I want to buy a new mattress, but they are expensive and the one i want is apparently only available to hotels.  That would be the case, wouldn't it?  We also aren't sure what size to get-S is 6'3 and wants a Cal King so his feet don't hang over the end but that means more money. 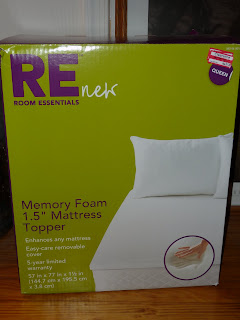 I have been shopping an insane amount recently, determined to work on the bedroom, and Tarjay had Magical Mattress on clearance from 69.99 to 17.48.  What the heck, we'll try it.  If it's anything like it's friend Magical Pillow.... 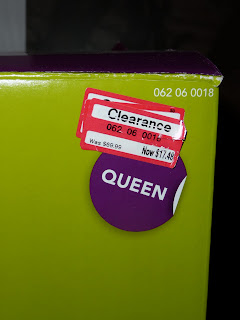 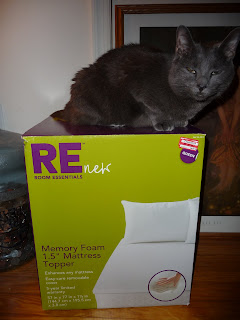 My lovely assistant would like you to know it is, my friends, it is like it's friend.  It's like...sleeping on softness.  I am sure that doesn't help you, but i can feel my body sink into its soft loveliness, as opposed to being pushed back which is what it felt like without it. 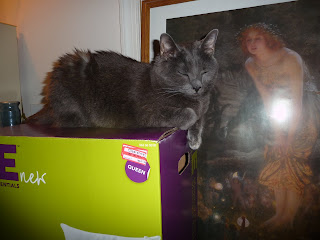 I may never leave the bedroom again.
What sort of mattress do you have?  Have you ever stayed somewhere where you wanted to take that one with you?
Posted by the cape on the corner at 7:25 PM

I have an inexpensive mattress and got a memory foam and it makes a huge difference. So glad your Hubby is better. Migraines are awful, I have them occasionally.

My oldest daughter suffers from migraines also and I've spent several times in the ER with her... hope "S" has it under control!
Thanks for your visit to my blog today.. I found out it's a "Panther" not a bob cat.. ew ew ew.. but it's so beautiful!
Sandy
thewondersofdoing@blogspot.com

Oh man... my sister suffers from those same type of "atypical migraines" that almost manifest like a stroke. One side of the body going numb, slurred speech etc.

We have a Sealy Posturpedic mattress with pillow top - it is about 16 years old, so we are due for a new one. King size- Hubby is 6'2" and I am 6'0"... a couple of years ago we bought a queen size Englander mattress for my daughter's room - pillow top. Her room doubles as our guest room. It is the best mattress in the house and SO comfortable. When we get around to replacing our King size, that is what I will go with next.

want to know something scary? one of my coworkers had a migraine in her stomach. that's right. i thought, yeah right, not possible. but yes! since the aorta vein goes through your stomach, it's possible for a migraine to originate in your stomach. it's VERY rare, but man, she was in the hospital for 2.5 weeks.

I LOVE when I find an AWESOME sale:)
Its such a LOVELY fantastic FEELING!
xoxo
bB

I love it! GREAT SITE!! I can't wait to explore more!! I am your newest FRIDAY follower!

I lovve your blog! I can't stop reading! :) I am a new follower from the Trendy Treehouse hop. I am so glad I found you! I hope you will stop y and follow me too! www.livingonloveandcents.blogspot.com Check out all the giveaways and great deals! Have a great weekend! Heather

I suffer from migraines too and nothing helps... All I can do is lay in bed and cry, mine make me get sick constantly, even the smell of food! No doctor can figure it out and they want me to see a neurologist but I am terrified beyond belief!

Anywho we have this mattress pad except in the 2in and my moms guest bed has this one except in the 4 inch I must say I am in love with hers, though ours isn't bad!

I want the Hampton Inn bed by serta and you can buy them! Or the green home mattress again by serta! Anything really soft and squishy! But my husband is tall too and wants a king so we will have to make sure we are getting the very best before taking that plunge!!

I love my bed...I thank God for my bed almost every night! Anytime hubby and I leave home for an overnighter someplace, we always miss our bed. It is a WATER bed; purchased 23 years ago and still going strong. It was the best investment we ever made. But, I'll bet that Magical Matress on top would make things even more heavenly. Oh , I feel a nap coming on~~~