My first attempt at stripping

wood, of course.  Does that joke ever get old?

I found this lovely 2 tiered stand at my fave thrift store for 4 bucks, and didn't hesitate to get it.  I thought, plant stand, something for the bedroom, whatever.  Really it was the two tiers and the pointed sides that sold me.  There's something middle eastern or mediteranean about it to me, but S thinks it looks like it belongs in a church. 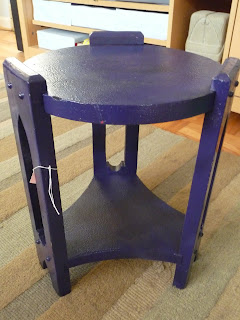 I was really excited to work on it this weekend.  In fact, i was determined to strip it, primer, paint, and do something decorative on top during this long weekend. Totally feasable. 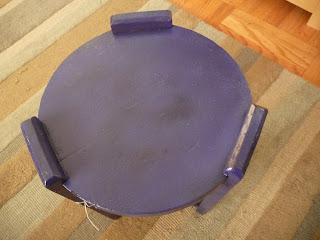 S tried to take it apart but said it would ruin the wood if he undid the screws.  So stripping had to take place as is.  Have i mentioned i've never done this before, but how hard could it be? 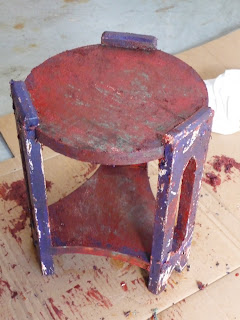 We have purple, then red, then green.  That green isn't going anywhere, i think it's stained the wood. 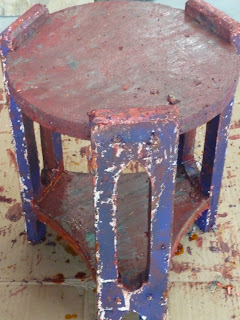 Darn those sides!  I needed to walk away, calm down, and then i went back out to sand.  Nothing.  It needs more than i can give it.  I was just going to prime it so I didn't have to look at the mess that it now is, but S convinced me to wait til he sees it.  Then he will break out the big guns.  Or tell me there is nothing there can be done. 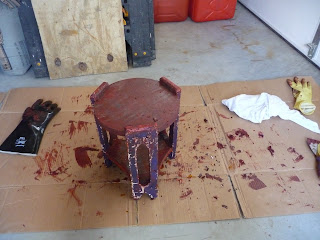 This looks like a crime scene, but i promise no one was harmed in the stripping of this piece!  Where's that yellow tape when you need it?  Mission un-accomplished.  Poo.

Linking to Southern Hospitality, Coastal Charm, Debbie Doos, Tales from Bloggeritaville.
Posted by the cape on the corner at 5:38 PM

Oh boy do I feel your pain. I can't tell you how many times I've thought, "I will just strip this thing down and re-do it" only to face what seems like days of frustration, smell, and mess. And then I end up painting it because it looks so bad. Don't give up.

LOL - It's fun at first to see a little paint bubbling up and peeling it. Then there are those stubborn spots and the frustration sits in! I had a small table I recently stripped and redid. More work than it was worth! LOL
What did you use to strip it with? I use the citristrip, that way I don't have to wear gloves or a respirator.

strip? repaint? never I just use as is :) or paint over the top--too many kids not enough time!

Shari @ My Cottage of Bliss said...

Been there. Done that. Frustrating isn't it? I tried to strip a bench that was painted yellow. Tried several different strippers with very little success. I'm ready to throw the whole thing in the trash or give it to Goodwill. I just don't have the patience for such tedious work. Wishing you better luck.

ha! The fact that I have to do something because of my blog does drive quite a few projects. like not eating out to dinner for a year--gulp!

I'm so sorry this has been a frustrating project. Good luck with your next step.

Oh, I think most of have this T-shirt! LOL I have a whole file of, "This is driving me insane and not coming out the way I want it to"!! LOL

I would just make sure that the blue areas are really scuffed up and then cleaned and then just paint that sucker!

I know the feeling. I have had quiet a few stripping mishaps in my day. I would just sand it and slap a coat of paint on it. Black paint covers a lot of sins and it's very in now.
Annette

Hang in there! I know it's a horrible process, but the satisfaction will be well worth the pain I promise!! I was so nice to see you over at DesignTies... your comment on my mat project was so very much appreciated! Seeing what you're accomplishing here, I'm sure you could do such an easy project like the spray painting of a doormat. Do it ;-)
Victoria

Stripping is so much work--hard work. Don't give up---the beautiful transformation will be that much sweeter! Happy Stripping!

Ever start a project and then were sorry you started it ? I've done that MANY times! I absolutely hate stripping furniture. I say just give it a good sanding, get it all smooth and paint right over it! Will check back in to see what the verdict is.
Thanks for visiting today!
Lisa

Keep at it! Nice to visit here again...

Yes, it does look like a crime scene--man, you could make up a great story! It is amazing what you can find as you strip (and I didn't even think of anything but stripping wood!)

I haven't stripped anything in years, but when I did there was a product that your essentially painted on, then hosed off with water. It lifted up the paint ... and I have been known to take small things to the car wash to use the pressure hose ... now I have my own pressure hose!! I'd keep working on this. It is probably a fern stand that was made by a high schooler in a shop class in the 1940's or 50's ... You might still end up painting it ... but getting all that gunk off will be a good thing!

Really I think you should have kept your clothes on! Just kidding...you will get through it, but boy does that stink! Thanks for joining in on the party.

I do hate stripping!!! Paint that is!!!
I loved your comment about a crime scene, I got a good chuckle out of it. Sometimes it helps to walk away for a day or so or more.....

Oh no, no stripping for me!!! I paint it or pass it by! I can't wait to see how this turns out! I hope the rest of your long weekend was good?!

Just visiting from debbiedoos party! Stripping is a pain. I have done it and if there is more than one coat of paint it is just awful. So now it is either prime and paint or sand and stain for me! Hang in there, you can clean it up enough to prime and paint!

It does look like a crime scene, but it should all work out. Good Luck!

It does look like a crime scene..lol..CSI!! In the end when it's all said and done,,it will be beautiful...and you will know it was accomplished by you!!

You brave thing...keep at it. I've never stripped furniture before and had no idea it was so much work.

Oh man...these pics bring back terrifying memories!! 23 years ago I tried stripping HUGE cupboard doors...the kind that was built in the early 1900's...cupboards so tall you needed a stepping stool just to reach the second shelf...and then the third and fourth shelf. It was a disaster and I vowed to NEVER strip again. I'm sad to see that stripping hasn't gotten any easier. You go girl~~

By the way, thanks for stopping by my place. Summer's going good, but too fast! (-;

Cool website, I hadn't come across thecapeonthecorner.blogspot.com previously during my searches!
Continue the excellent work!