Tomorrow is my birthday and my very first giveaway! Since i am doing that post tomorrow, i wanted to tell you about the most wonderful and magical birthday, like, ever since i am getting all nostalgic about it.  I even changed my facebook picture to one from then.  I warn you, it's a longer post with pictures, but totally warranted in this case.

So last year was my 30th birthday.  I told S i wanted to turn 30 somewhere, i didn't care where, but somewhere.  That somewhere turned out to be a glorious 10 days in the Netherlands, and 2 days in Belgium.  Squeal!!!!  Remember that post where i answered about the best day ever?  Well, it was the best 12 days ever.

We stayed with S's coworker who was living there for business for a year.  He had a fantastic 2 bedroom apartment in Leiden, which is about a half hour south of Amsterdam.  That was our starting point, and everyday we went somewhere new.  I love being immersed in a culture, and travelling like a local.  After a few days, we could maneuver pretty easily on our own. 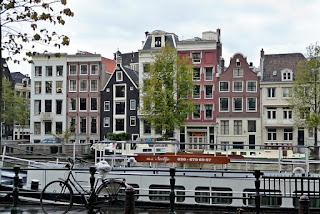 So we started in Amsterdam, which is actually more adorable than i would have thought.  I couldn't get enough of the old, really old, really really old houses.  They are totally out of whack with one another, i don't know how they all remain standing.  Some are completely pitched forward, or really slanted to one direction.  Major points for charm, tho. 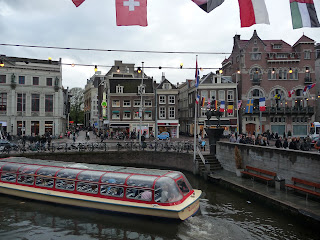 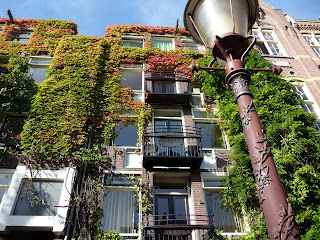 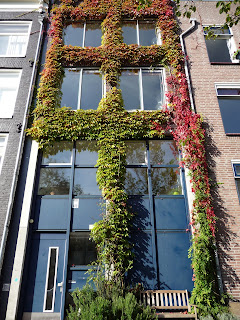 I was so impressed with the greenery and plants out front of people's houses.  There's a lot of trust there-i can't even have a scarecrow in my yard b/c ignorant people steal them, but these people have nicely potted plants and things that you are literally walking right by. 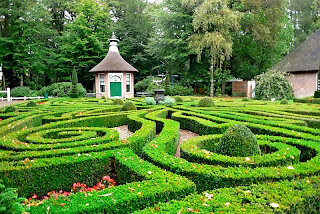 This is Arnhem.  It is an open air museum, and it's where i milked my first cow. 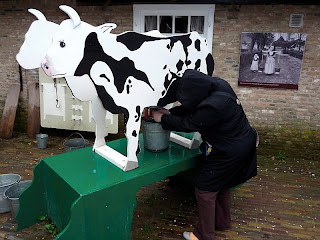 Granted, it's not a real cow, and it was in the children's area, but that ain't enough to keep me from doing it.  This was an incredibly soggy day, and we were at an open air museum.  Good times! 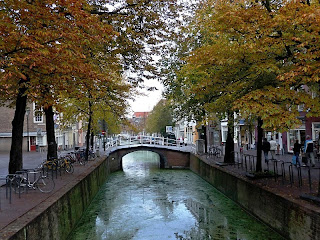 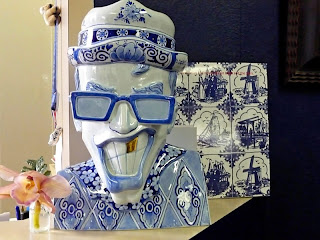 Delft.  Home of artist Ver Meer and Delft pottery.  Delft is so flippin cute, I can't even take it.  Look at that Delft pottery Flava Flav style! 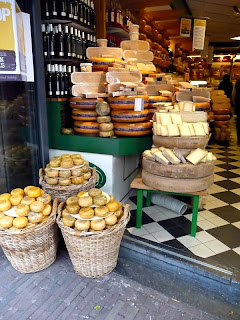 Haarlem-Finally, finally, a place that will let me sample cheese.  And sample cheese i did!  The most expensive in the shop, the best seller in the shop, the newest one, the oldest one.  We bought pounds and pounds of cheese to take home.  I was going to be really pissed if customs wouldn't let it in, but thankfully they did. 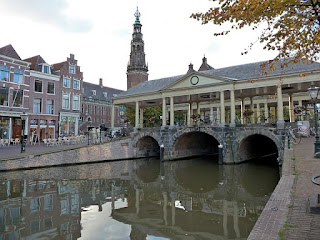 Leiden, our home base.  I loved it there.  Smaller, college town, great sites. 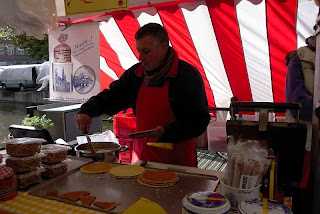 Stroopwaffel guy!  Freshly made, warm and gooey caramelly goodness inside, have mercy this was fantastic.  It was literally the size of our heads! 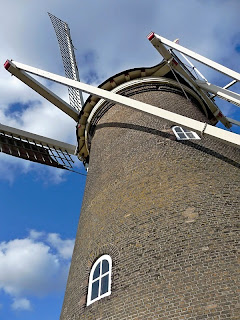 DeValk windmill that we were able to walk through. 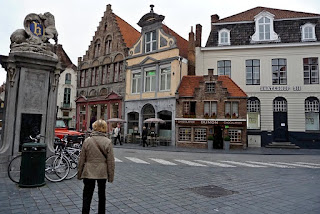 Bruges, Belgium.  Full of tourists, but not touristy.  It was ok to whip out the map here, b/c it is a popular destination for weekend holidays in Europe.  Apparently a lot of Londoners come for long weekends, which means much of the menus were translated into English.  That tiny little building up there is Dumon chocolate, much thought to be the best chocolates.  Bruges is where my leaf table coverings were from-so glad to have those memories for Fall, now. 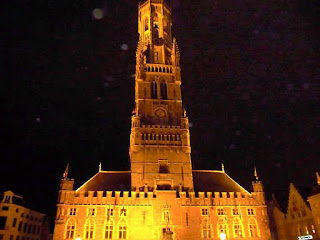 Bell Tower at night-we were able to climb this tower and see and hear a carillon concert that takes place once a week.  Once a week, for one hour only, and totally unplanned and unknowingly we happened to be there.  Seeing the machinery start up and being able to look up and see the bells as they were hit, literally moved to tears.  It was just so right day, right time. 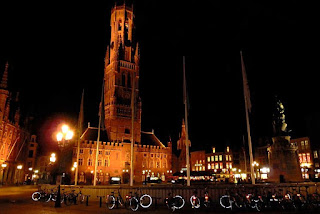 Reflection of bicycle wheels, the dominant mode of transportation in both places.  You'd think that means all sweet and slow, but NU-UH!  You'd be wrong.  Pedestrians do NOT have the right of way over there.  You will get hit by bikers, and you will be in the wrong. 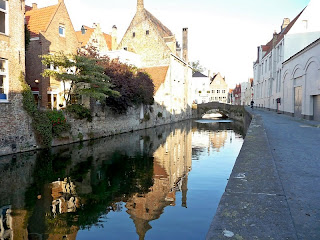 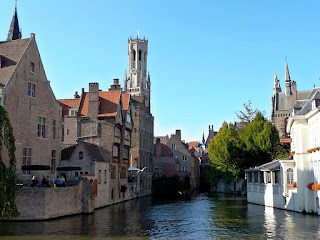 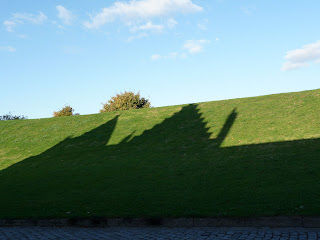 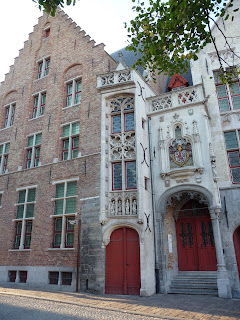 The tiniest little house in Bruges.  Thanks to Rick Steve's guidebook i was able to locate it, and really conduct our own tour of the cities and sites.  It was like my bible, i carried it everywhere, i consulted it at every turn, i went to it for guidance.  Where should we eat for dinner?  Let's see what Rick Steve's says.  It would not be exaggerating if every sentence i uttered during these 12 days started with "Rick Steve's says...." 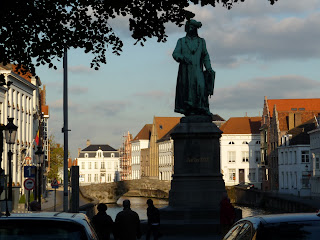 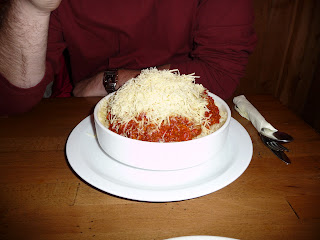 Rick Steve's said to eat pasta here, and Rick Steve's was right!  It was really cheap, considering, and you had a heaping bowl of delicious home made pasta. 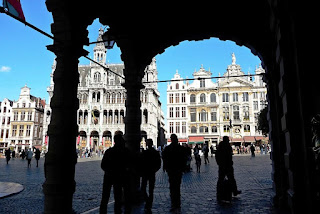 We took the train from Holland to Belgium, stopping in Antwerp for lunch on the way there.  When we took the train back to Holland we stopped in Brussels for lunch.  I wouldn't have not traveled there, but let's just say Rick Steve's was right about gypsies begging for money, and sending their kids to do it.  They had no problems coming into the restaurant and asking patrons for money-while you are sitting at your table eating-and it totally turned me off to the city. Let me tell you about some of the other things we ate...real hot chocolate with Belgian chocolate in it, white hot chocolate (above), white chocolate covered Belgian waffles, bitterballen (fried meatballs, which was yum!) lots of goat cheese croquettes.  Once i discovered them i ordered them everywhere.

So there you go, that was my once in a lifetime extended trip to Holland/Netherlands/Belgium where i turned 30.  Have you gone on any trips you consider once in a lifetime?  Don't forget to come back tomorrow for my birthday giveaway to CSN!

know what, i'm going to link this up to it's a blog party and fave things fri!
Posted by the cape on the corner at 6:06 AM

Email ThisBlogThis!Share to TwitterShare to FacebookShare to Pinterest
Labels: mine, tour, vacation, woot

LOVING the pics.. and nope not yet.. I have seen some wonderful places but Greece is gong to be THAT trip for me!!
~Tana

Wow! What a fantastic trip! I would love to travel abroad. Never been so it's on my bucket list! Gorgeous photos and your descriptions of the food...well lets just say I need a napkin for the drool!!! Wh0!at a wonderful way to celebrate turning 30! Happy Birthday tomorrow and I'll be back!!

Now that's the way to celebrate your 30th birthday in style! I'm hoping to travel somewhere fun next year for mine to help ease the pain of getting older. I took a trip last year to London that came darn close to being the trip of a lifetime, although I wish it had been longer than one week and that my husband's feet hadn't pained him the whole time we were there, making him a little miserable to travel with. Thanks for the detailed travelogue and the lovely pics! Made me feel like I was on vacation too for a few minutes instead of stuck here at work.

What beautiful photos - it looks like you had an amazing 30th birthday! Goat cheese croquettes? Yes please! I've had several layovers at the Amsterdam airport but never had enough time to go out and explore. It looks like a charming place. Have a great 31st birthday!

Isn't Bruges FANTASTIC!? I fell in love when I was there, and I didn't get to stay long enough! I went to that EXACT chocolate shop, and have a picture of me standing in front of it! :)

Bruges was part of my one in a lifetime European trip! It was Feb 2005 and my boyfriend at the time brought me to London, Bruges, Paris and Rome... we did all of them in 10 days! Incredible. Perfect for me when I was 19... but I would love to go back and see them all again (already done London, but can't get enough of that place).

Happy Birthday if I don't get a chance to swing by tomorrow and say it! :)

How fantastic!! I'd live on that trip for a while too : )
how do you top that?!
Happy early birthday

Happy early bday! You luck out! I wish I could of turned 30 somewhere, other than my house :-P Beautiful pictures!! And my mouth is still drooling from the white hot chocolates!

What a FABULOUS trip that had to be~~Love those old houses...gorgeous architecture and so much history. And you're only gonna be 31? Such a young thing you are!!

So far, my trip of a life-time is Yosemite. I sooo love that place!

Girl! Happy Bday! And what an unforgettable way to spend your birthday.

So happy to read this post. I have been to Europe many times, but never to The Netherlands, nor Belgium. The one trip to planned there, we had to cancel. Loved all of your photos, especially, the tiniest little house! Thanks for all of the hints and Happy Birthday to you (a little early?)!

Oh what a wonderful trip! It brought back so many memories of when I went when I was a mere 16 years old. So much beautiful quaint architecture, such great cheese! And yes, a ton of delft!

Happy to have you at "Oh, the PLACES I've been!"

We visited Brussels and Bruges (Brugge) a number of years ago. It's a tiny country, but with a Canadian issue--French speaking in the east, and Flemish speaking in the West. On the hour long train ride from Brussels to Bruges, the digital sign on the train abruptly changed from Bruges to Brugge. Most of the Flemish speakers speak excellent English. Someone explained to us that because there are so few Flemish speakers in the world, it doesn't pay to dub English/American TV shows and movies into Flemish, so everything has subtitles, apparently, an excellent way to learn another language. Bruges was a lovely town to be sure, but we also went on a fascinating tour of the World War battlefields of "Flanders Fields"---truly shocking.

Glad you had a fab birthday.