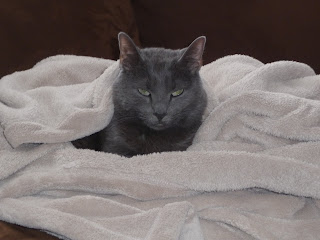 If you are familiar with this song from the Smiths, you know the last word is Sunday, and it pretty much fits this dreary day (nay, dreary weekend) to a T. And altho the work week looms ahead ominously, there are three things i look forward to about Sundays making it slightly more bearable. First, I have decided to post a picture of the world's cutest cat on the day of her namesake, so every Sunday i will try to post a picture of Sunday, who was named after the Smiths song for obvious reasons. I can't get enough of her.

The second reason i look forward to Sundays is that Frank Warren, of PostSecret.blogspot.com, posts a new batch of secrets that are mailed to his po box from around the world. The secrets are funny, witty, sad, depressing, expressive, creative, an outlet, and a support for others who feel as if they are the only ones with that secret.

And lastly, "the most fast paced hour on TV," and the only show i make it a point to watch is on. I shush the boyfriend, i accept no calls except during commercials, and i hunker down for an hour of The Amazing Race. Traveling the world is my dream, and i love to see places i have been and places i hope to get to featured on this deservedly Emmy winning show. Consecutive Emmys. Like 7. Take that, Survivor!
Posted by the cape on the corner at 1:00 PM

Email ThisBlogThis!Share to TwitterShare to FacebookShare to Pinterest
Labels: Sunday